Breast cancer is the most common malignancy and the leading cause of cancer deaths in women globally, with 1.7 million new cases and 535,000 associated deaths in 2016 (1); 60–75% of women with breast cancer have estrogen receptor (ER)-positive tumors. ER expression has been directly associated with the prognosis of breast cancer patients and is an essential predictor of endocrine therapy response (2-4).

In 2010, the American Society of Clinical Oncology (ASCO) and the College of American Pathologists (CAP) recommended that ER is considered positive if ≥1% of the tumor cells showed positive nuclear ER staining by immunohistochemistry (IHC). ASCO/CAP also recommended that endocrine therapy be considered in these patients with ≥1% ER-positive cells (5). However, some experts have questioned these recommendations because most of the prospective data detailing the correlation between the ER expression and treatment response was derived from ligand-binding assays (LBA) instead of traditional IHC (6-9). As most breast cancers patients present with ER-negative or strongly ER-positive (≥10%) tumors, this recommendation has affected a small subset of patients who show low ER expression in the range of 1–9% (10). Previously, Viale et al. retrospectively analyzed ER expression by IHC in 6,291 patients from the Breast International Group (BIG) 1-98 Trial and discovered that less than 1% of patients showed low ER expression (11). The small sample size of patients with low ER expression makes it difficult to obtain any dependable or statistically significant conclusions on optimal treatment strategies. For this reason, the ASCO/CAP recommends that oncologists discuss the benefits and risks of endocrine therapy with the patients to aid them in making an informed decision regarding treatment options (5).

A multi-institutional registry consisting of 17,216 patients with breast cancer who were diagnosed from January 2008 to December 2016 in China was set up. We identified patients who were diagnosed with stage I to III primary invasive breast cancer with low ER expression (1–9%). Patients were excluded from this study when the IHC-based ER expression data were missing. A total of 457 patients were included in the final analysis. All pathologic specimens were reviewed by dedicated breast pathologists. The IHC and fluorescence in situ hybridization (FISH) analyses were performed using the same standard procedures described in the ASCO/CAP guidelines.

Clinicopathological features were obtained from each patient, which included age, menopausal status, clinical stage, tumor size, nodal status, lymphovascular invasion (LVI), progesterone receptor (PR) expression, neoadjuvant chemotherapy, adjuvant chemotherapy, and adjuvant endocrine therapy. Pathological complete response (pCR) was defined as there being no invasive carcinoma in the breast or tumor in the axilla at the time of surgery. Recurrence-free survival (RFS) was calculated from the date of the initial diagnosis to the date of the first local or distant recurrence.

The clinicopathological features were tabulated and compared between the human epidermal growth factor 2 (HER2)-positive and HER2-negative groups using the Chi-square test and Fisher’s exact test. Multivariate logistic regression models were used to investigate the association between clinicopathological variables and endocrine therapy for decision-making purposes. Kaplan-Meier curves were used to estimate the survival outcomes for all patients, and the log-rank test used to compare RFS between patients with and without endocrine therapy. The Cox proportional hazards model was used to determine the effects of prognostic factors on survival outcomes. SPSS Version 19.0 (IBM, Chicago, IL, USA) was used for the statistical analysis, and P≤0.05 was considered statistically significant.

The clinicopathological characteristics of the patients and tumors are summarized in Table 1. For all patients, the mean age at diagnosis was 49 years (range, 25–80 years). Most patients were premenopausal (51.6%), and stage II was the most common clinical stage (55.6%). Only 38.7% of patients were PR-positive. The majority (71.6%) of patients showed >20% Ki-67 expression, while 33% of patients had ≥50% Ki-67 expression. When comparing the HER2-positive and HER2-negative groups, the HER2-positive group showed higher (>20%) Ki-67 levels (76.2% vs. 66.5%, P=0.02). However, the other characteristics, including age, stage, tumor size, nodal status, LVI, and PR status, were similar between the HER2-positive and HER2-negative groups. 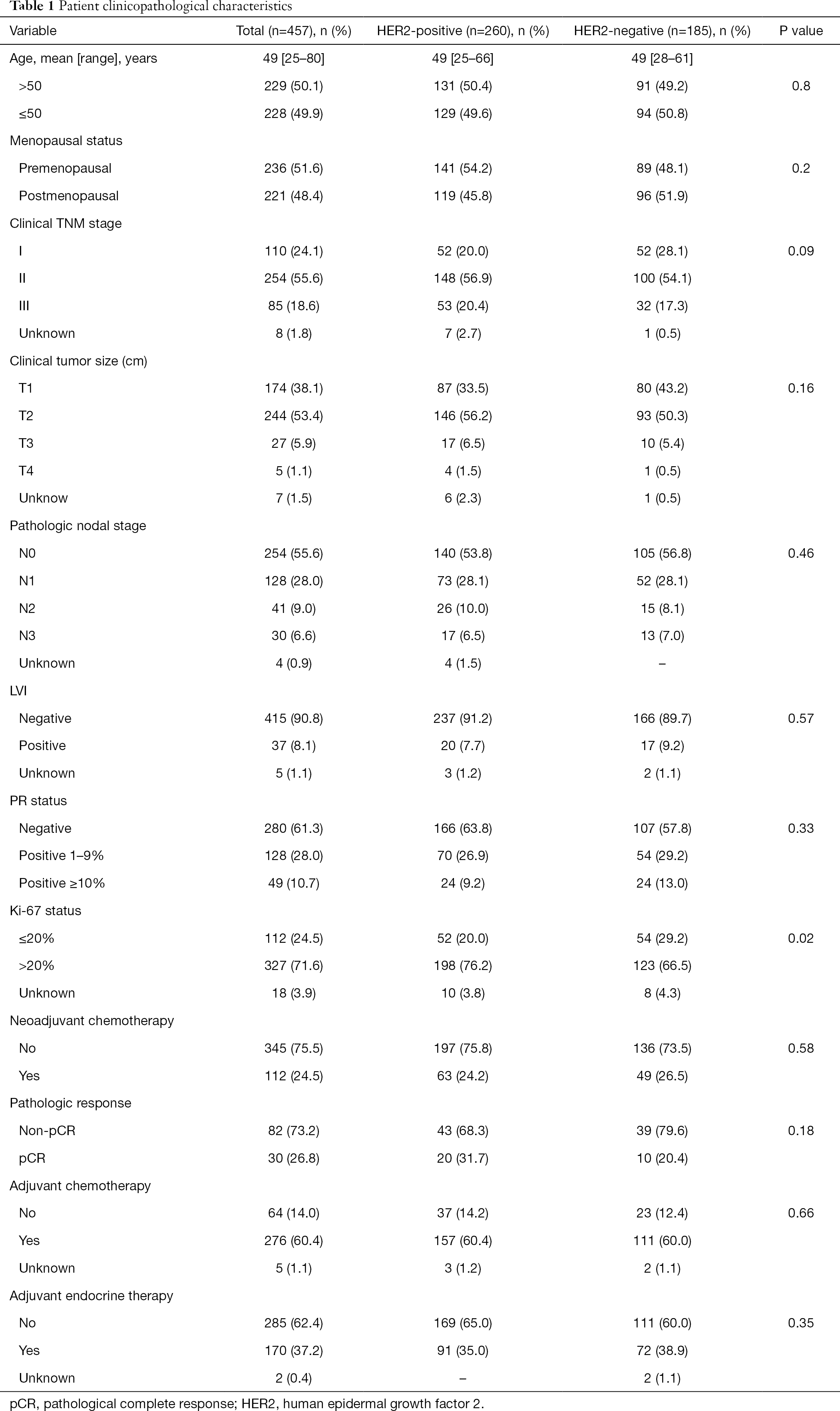 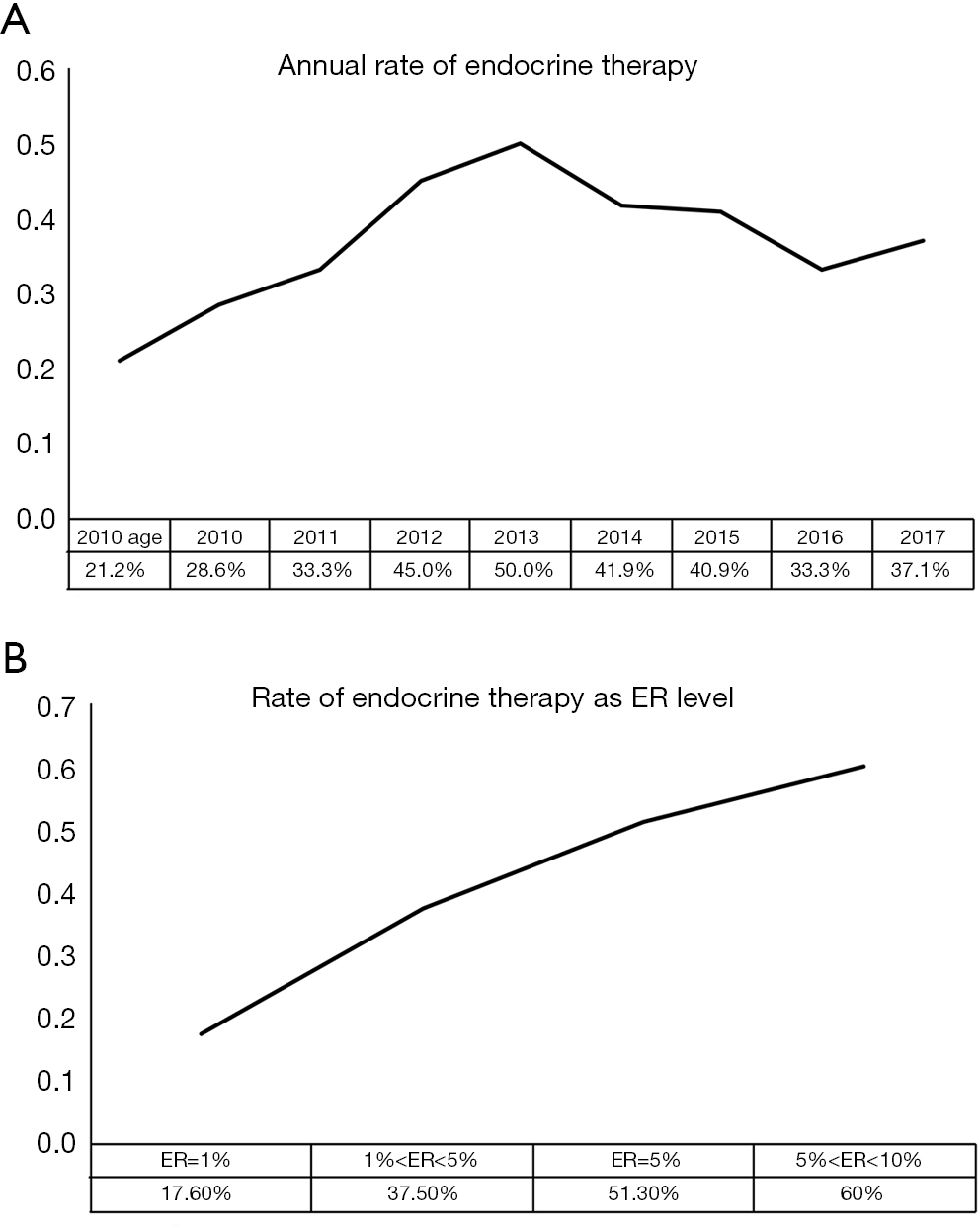 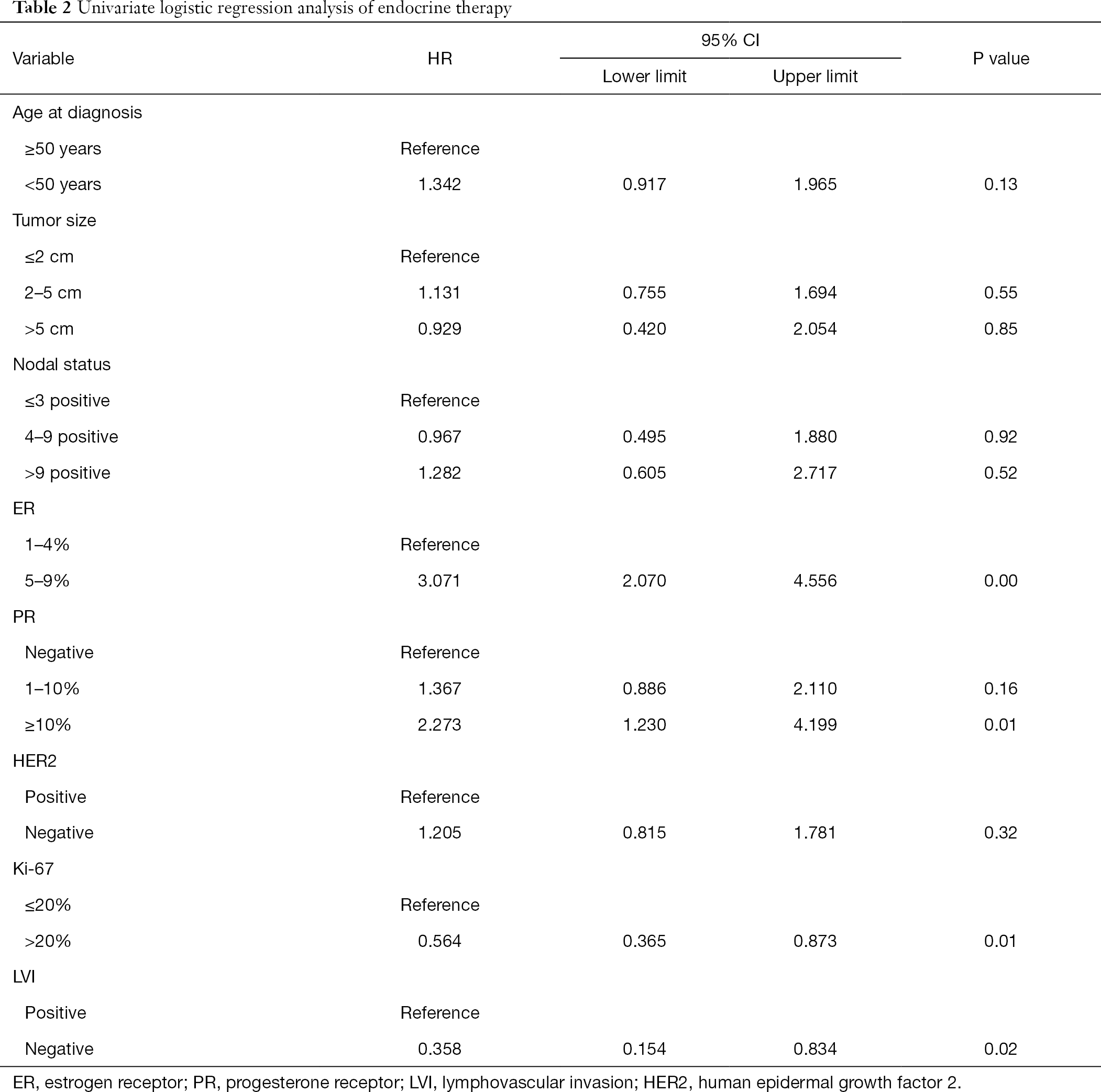 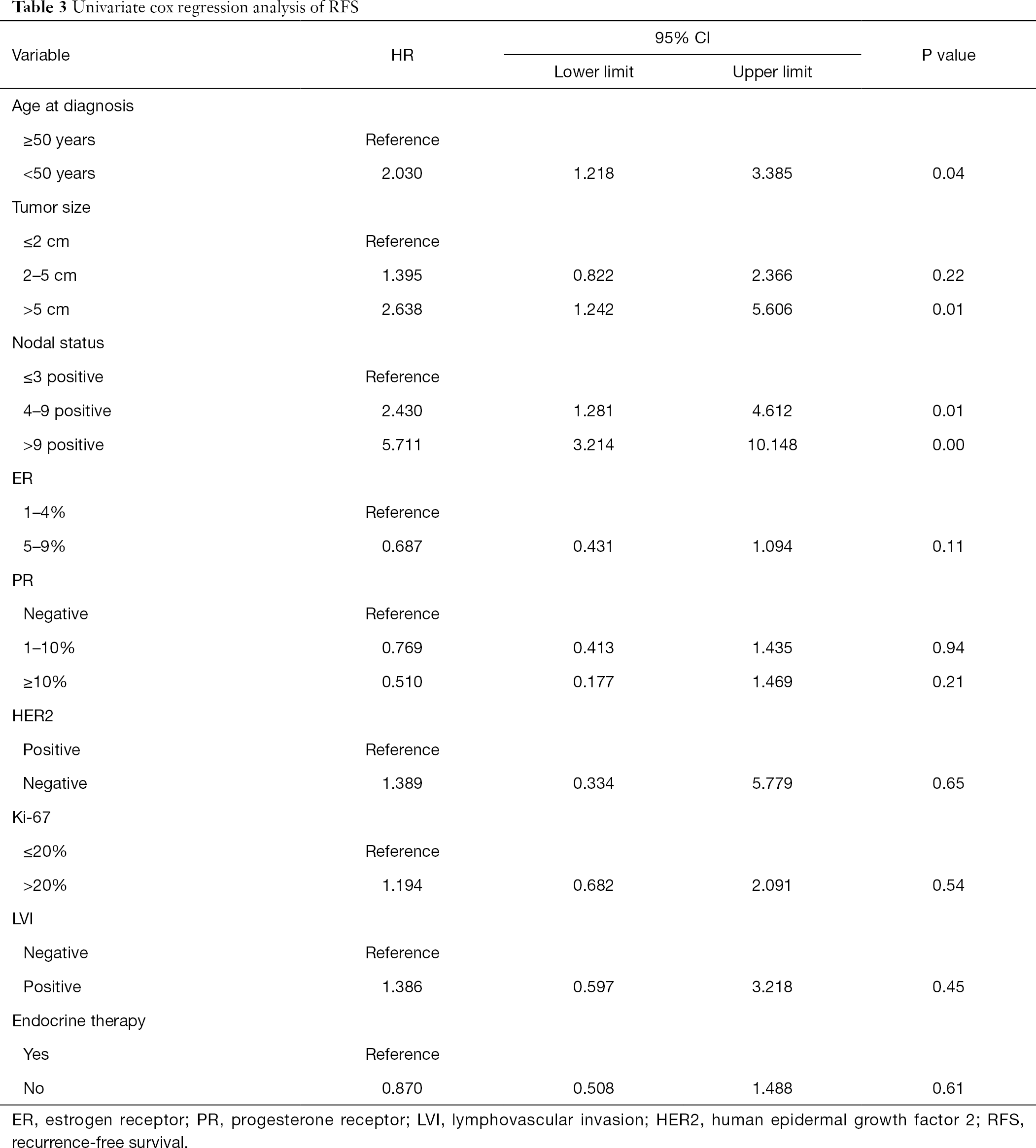 Figure 2 Comparison of recurrence-free survival (RFS) among patient who received and who did not receive endocrine therapy.

The updated ASCO/CAP guidelines lowered the previous cutoff value of ER positivity, when assessed by IHC, and recommends that physicians consider endocrine therapy in patients whose breast tumors show ≥1% ER-positive cells (5). These results are made possible for breast cancer patients with low ER expression to receive endocrine therapy if desired. However, only a small subset of breast cancer patients fit this category. This study utilized the largest group of patients with low ER-expressing tumors up to now. In our study, 457 (2.7%) patients showed low ER expression from multi-centers consisting of 17216 patients. This rate is similar to 2.6% (250/9,639), determined by Yi et al. (12), and 2.1% (33/1,521) found by Regan et al. (9). However, higher rates have been reported. For example, Honma et al. found that 6.4% (73/1,149) of patients with highly invasive breast cancer low ER expression (13). Although the rates were different, what we can see from these studies is that this subgroup with ER low expression is rare, and the sample size may often be too small to draw reliable conclusions.

While IHC is considered the standard for assessing ER expression, it may not be the most exact tool for determining treatment response. As an alternative, gene expression profiling may help guide clinical decisions in patients with low ER expression. Blueprint TM, an 80-gene mRNA expression, and PAM 50 have been used for selecting patients with tumors more likely to respond to endocrine therapy, as they could identify luminal and basal tumors (20-22). These studies revealed that most tumors with low ER expression had molecular features like those of ER-negative tumors. However, other clinicopathological indicators such as PR should be considered, and chemotherapy may be more appropriate and vital for some patients in this subgroup.

There were two limitations to this study that should be considered. First, although this is the largest group of patients with low ER expression used to date, the group of patients is small. Secondly, this study was retrospective, and future studies using current patients may supply added insight into other factors that may potentially affect treatment response.

Reporting Checklist: The authors have completed the STROBE Checklist. Available at http://dx.doi.org/10.21037/tbcr-20-24

Ethical Statement: The authors are accountable for all aspects of the work in ensuring that questions related to the accuracy or integrity of any part of the work are appropriately investigated and resolved. The study was conducted in accordance with the Declaration of Helsinki (revised 2013) and the Harmonized Tripartite Guideline for Good Clinical Practice from the International Conference on Harmonization. This study was approved by the Institutional Review Board of The Affiliated Hospital of Qingdao University (QYFYKYLL 221311920). Informed consent was obtained from all individual participants included in the study.