CSCO BC guideline: updates for HER2 positive breast cancer in 2020

The Chinese Society of Clinical Oncology (CSCO) guideline for breast cancer (BC), which were published in 2017, have been one of the most distinctive sets of clinical guidelines in China (1). HER2 positive is an important subtype, accounting for about 20% of total BC cases. With the promotion of clinical research, HER2 positive treatments have entered the era of dual-target therapy in the form of trastuzumab and pertuzumab (HP). The approval of new drugs, inclusion of medical insurance, and other factors have also contributed to changes in treatment patterns, especially in recent years. Under these circumstances, the CSCO BC guidelines relating to HER2-positive BC have been significantly updated for 2020. This article mainly describes the development and update of the CSCO BC guideline for HER2 positive BC.

Target therapy for metastatic BC

Although a trastuzumab-based scheme is recommended as the first-line therapy by almost every set of guidelines, because of the influence of neoadjuvant and adjuvant targeted treatment of BC, the lines for anti-HER2 treatment are not clearly defined. 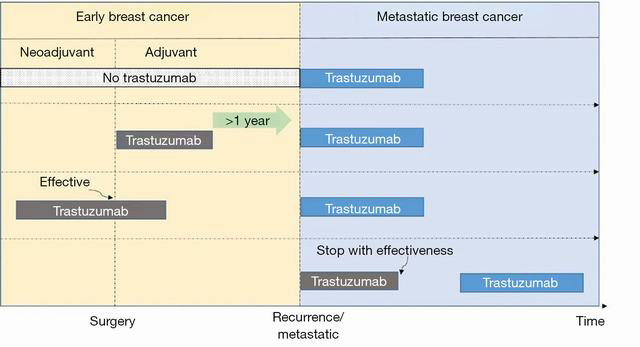 For the trastuzumab-sensitive population, the CLEOPATRA study (2) demonstrated the effect of taxane-trastuzumab-pertuzumab (THP) in metastatic BC. With an increasing amount of evidence and the lowered price of pertuzumab, THP is now a level I recommendation in our guideline (Table 1). However, docetaxel-capecitabine-trastuzumab (TXH) (3) is still an alternative scheme with high cost effectiveness and consensus among Chinese experts, making it a rational level I recommendation option.

One of the concerns that has arisen from the CLEOPATRA study is that only about 20% of patients had previously received taxanes. Those with prior resistance to taxanes are unlikely to benefit from THP again. For these patients, some clinical studies have verified the feasibility of trastuzumab-pertuzumab combined with other chemotherapy drugs [such as vinorelbine (4)]. Hence, this regimen has been added as level III recommendation in the CSCO BC guideline for 2020.

There have also been updates for those who show resistance to trastuzumab (Table S1). The NCCN guidelines recommend ado-trastuzumab emtansine (T-DM1) as the first-choice treatment and lapatinib as the second for second line therapy. In China, lapatinib combined with capecitabine has already served as the first choice for a long period of time, owing to the unattainability of T-DM1 or any other drugs. Pyrotinib is another oral irreversible tyrosine kinase inhibitor (TKI) for patients with HER2 positive BC. In a phase II clinical study (5), pyrotinib combined with capecitabine has been proved to be an effective and tolerable scheme when compared with lapatinib plus capecitabine. Considering their accessibility, tyrosine kinase inhibitor-contained regimens, pyrotinib, or lapatinib, hold priority over T-DM1 (Figure 2). 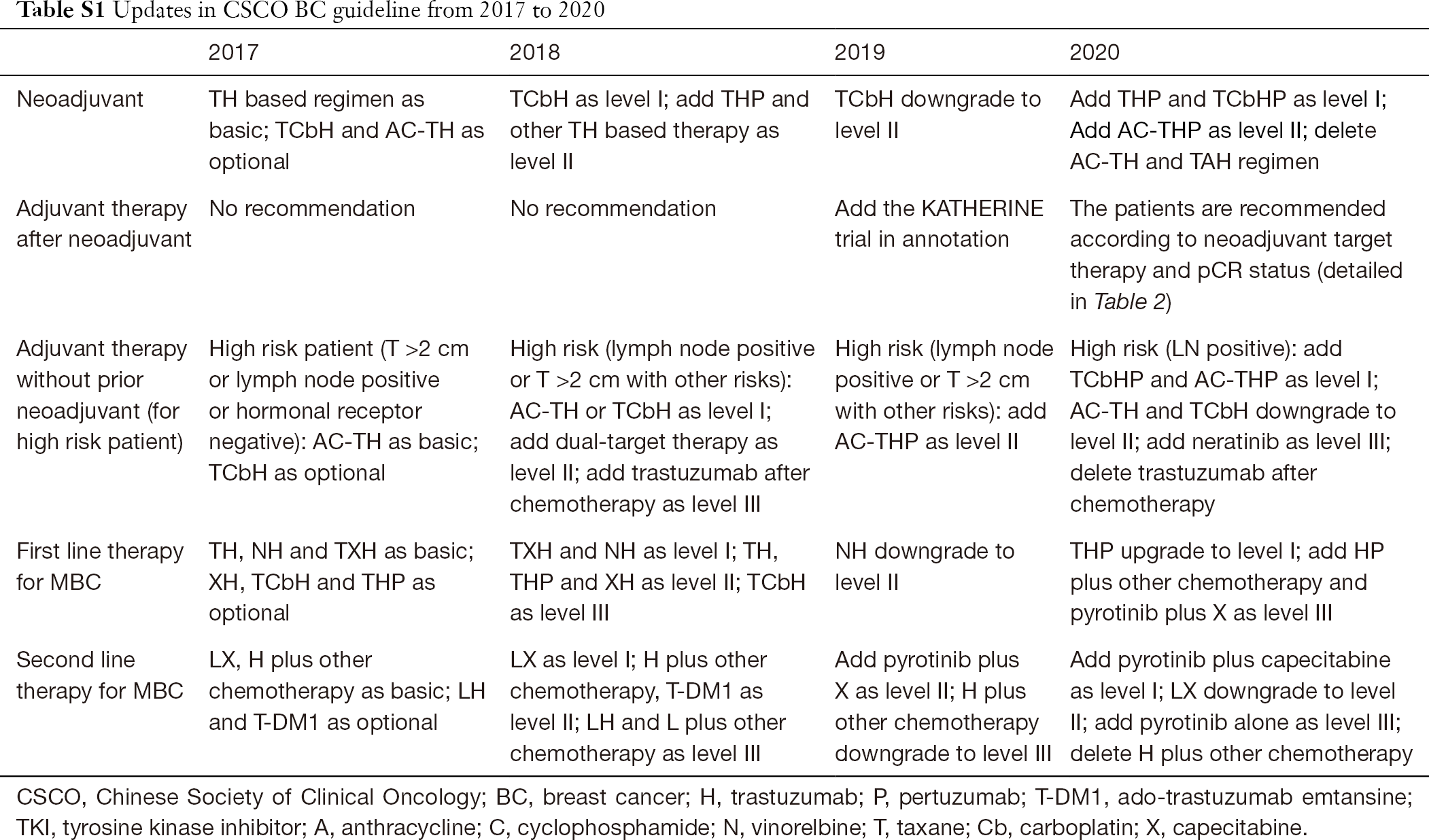 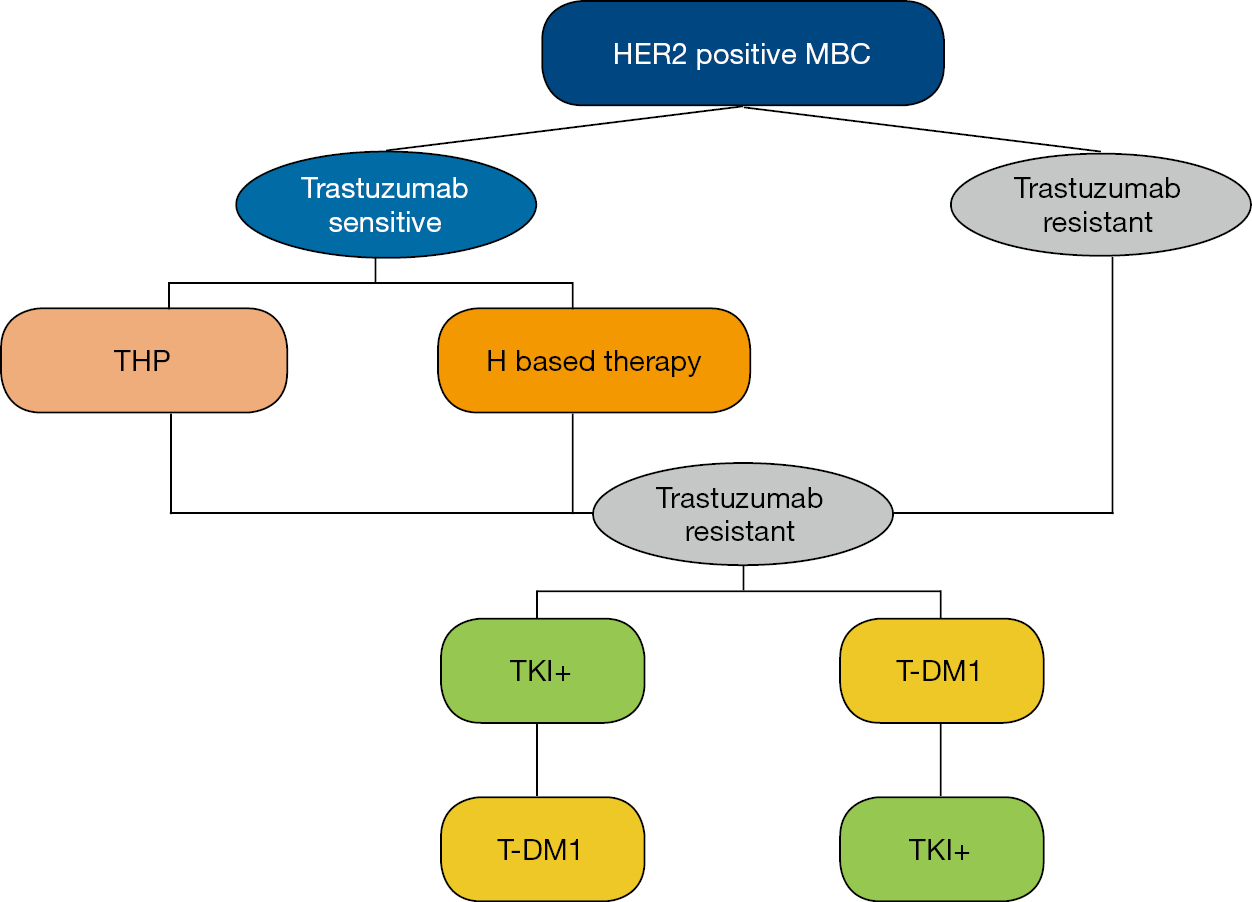 The PHENIX trial (6) revealed the promising efficacy of pyrotinib alone for patients with HER2 positive BC who have previously received taxane or trastuzumab. Therefore, pyrotinib alone has been added as a level III recommendation for those with resistance to trastuzumab. As a novel drug developed in China, pyrotinib, whether used alone or in combination, offers another treatment alternative, especially for those with resistance to lapatinib and T-DM1.

The APHINITY study (8) showed that the addition of pertuzumab to AC-TH (anthracycline plus cyclophosphamide followed by taxane plus trastuzumab) and TCbH (taxane carboplatin trastuzumab) could improve the invasive disease-free survival of patients, especially for those with positive lymph nodes. On this basis, for patients with positive lymph nodes, both AC-THP and TCbHP have been put forward as level I recommendations, while AC-TH and TCbH schemes have been downgraded to level II (Table 2). For those with risks other than positive lymph nodes (such as tumor lesions >2 cm and estrogen receptor negative tumors), AC-TH and TCbH should be the preferred treatment options when cost effectiveness and evidence are taken into account, while AC-THP and TCbHP have been included as level II recommendations.

The ExteNET study (9) has proved that neratinib for 12 months can significantly improve the 2-year invasive disease free survival when received after trastuzumab-based adjuvant therapy. Therefore, neratinib is included as the level III recommendation to offer more options to these high-risk patients. However, most of our experts concur that for patients who are receiving trastuzumab, additional pertuzumab should be considered over neranitib.

There is an escalating trend in target treatment for high-risk patients, while de-escalating chemotherapy is also effective for low risk HER2 positive patients in an adjuvant context. For patients without positive lymph nodes and other high-risk factors, de-escalating therapies such as a docetaxel-cyclophosphamide-trastuzumab scheme (TC+H) and a weekly trastuzumab plus paclitaxel scheme (TH) are recommended in the CSCO BC guideline. For hormone receptor positive patients whose risk of recurrence is too low to receive chemotherapy or those who exhibit intolerance to chemotherapy, endocrine therapy plus trastuzumab is also included as a level II recommendation in the CSCO BC guideline. The evidence level of endocrine therapy plus trastuzumab is 2A, which is attributed to the lack of necessary data but high consistency among domestic experts.

In the CSCO BC guideline, HER2 positive BC is one of the core factors in recommending neoadjuvant therapy. However, if HER2 positive is the only risk factor for a patient, our panelists agree that the diameter of the tumor lesion should be greater than 2 cm to avoid overtreatment.

Based on the NeoSphere trial (10), in 2015, the NCCN guidelines recommended an HP-containing scheme to treat early stage BC. However, it was not until 2020 that dual target therapy was included as a primary choice for HER2 positive patients in a neoadjuvant setting. The panelists agreed that dual target therapy is required if patients are suitable for neoadjuvant therapy. However, suspending the effective dual target therapy to receive a fluorouracil-epirubicin-cyclophosphamide (FEC) scheme after surgery is still controversial (11). More researches into extending THP courses to increase pCR rate and to avoid following an FEC regimen are needed. Comparatively, AC-THP became a favorable scheme over the THP-surgery-FEC strategy due to the continuous target therapy.

Platinum has always been an effective drug in a neoadjuvant setting. Since 2017, TCbH has been a level I recommendation in our guideline. This type of drug is irreplaceable even in the era of dual target therapy. The TRAIN-II study (12) has indicated that the addition of pertuzumab to TCbH would not significantly improve the cardiac toxicity of patients. The KRISTINE study (13) has also confirmed the effectiveness and safety of TCbHP in neoadjuvant therapy. On this basis, TCbHP has been included as a level I recommendation along with THP in our latest CSCO BC guideline. When choosing taxane, both docetaxel and paclitaxel are viable. Several clinical studies (14) have shown paclitaxel and nab-paclitaxel to have comparable survival benefit. Hence, nab-paclitaxel has become a more favorable option over paclitaxel.

The KATHERINE trial (15), which compared adjuvant target therapy in patients who had residual invasive cancer at surgery after the completion of neoadjuvant therapy plus HER2-targeted therapy, demonstrated a superior disease-free survival for those who received T-DM1 compared with those who received trastuzumab in an adjuvant setting. Given the rising importance of adjuvant target therapy after neoadjuvant therapy, we have added a new chapter offering recommendations based on different neoadjuvant anti-HER2 target therapies and whether residual invasive cancer is present (Table 3). This is one of the most significant innovations compared with other influential global guidelines (Figure 3). 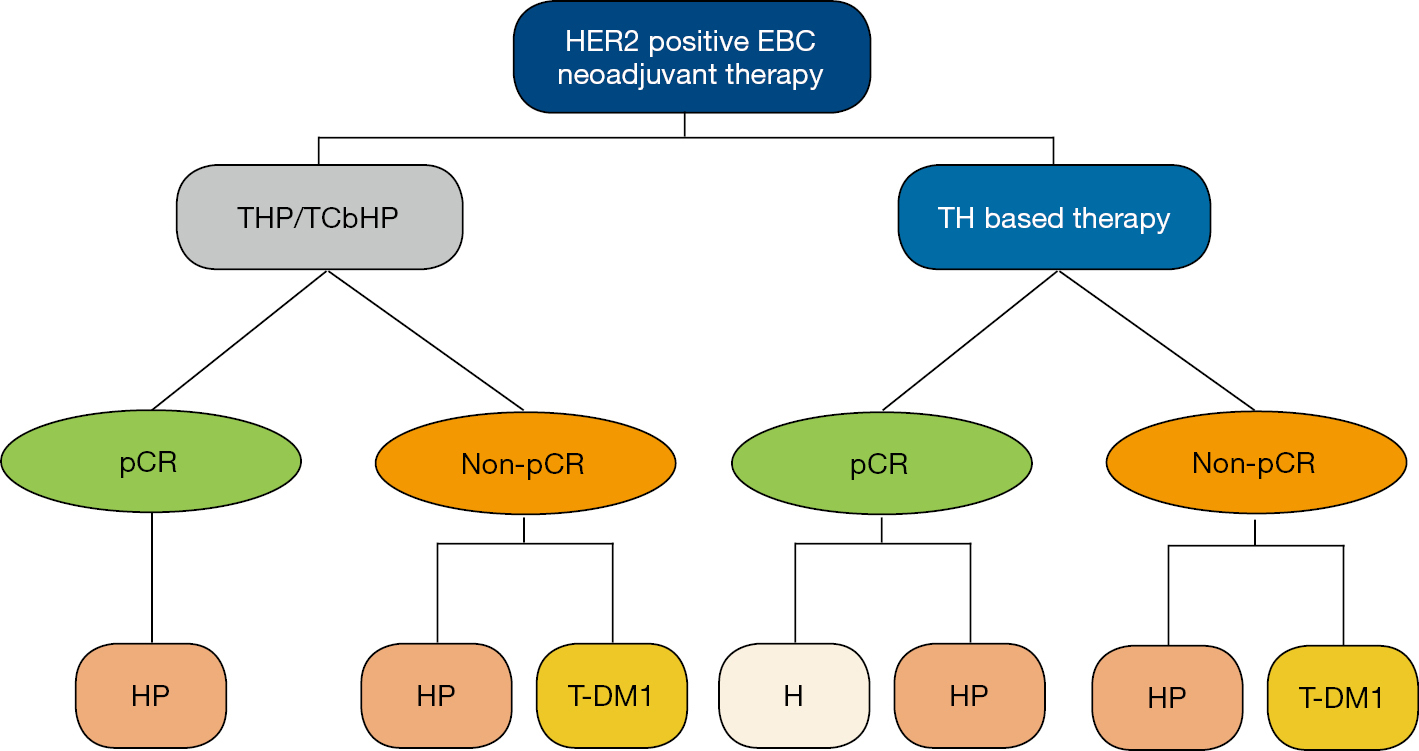 Patients who achieve pathologic complete response (pCR) after neoadjuvant therapy for HER2-positive BC are associated with substantially longer disease-free survival and OS (16). For those who have achieved pCR, there is strong evidence supporting the continuation of their original effective neoadjuvant targeted drugs during adjuvant therapy. However, for patients who received only trastuzumab during neoadjuvant therapy, a switch to trastuzumab-pertuzumab is deemed acceptable due to the probable benefit offered by pertuzumab.

Meanwhile, for those with residual invasive tumors, the CSCO BC guideline regard T-DM1 as a level I recommendation. Given the inaccessibility and poor cost effectiveness of T-DM1 in China, pertuzumab plus trastuzumab is also a reliable alternative. The continuous use of the original target drug is also acceptable, and is listed in the level II recommendations. However, we do not recommend the usage of trastuzumab alone as adjuvant therapy after poor response to neoadjuvant dual target therapy.

In summary, the CSCO BC guideline has developed rapidly over the past 4 years. Each update attests to the huge progress that is being made in cancer treatment, especially for HER2 positive BC. Pertuzumab, pyrotinib, and the recommendations for adjuvant therapy after neoadjuvant therapy represent the most important updates this year. From dual-targeted therapy to the post-trastuzumab era, there are more treatment options for HER2 positive patients. The CSCO BC guideline will continue to play an important role in promoting standardized treatment of BC and will further optimize targeted therapies in China and other countries.

Ethical Statement: The authors are accountable for all aspects of the work in ensuring that questions related to the accuracy or integrity of any part of the work are appropriately investigated and resolved.